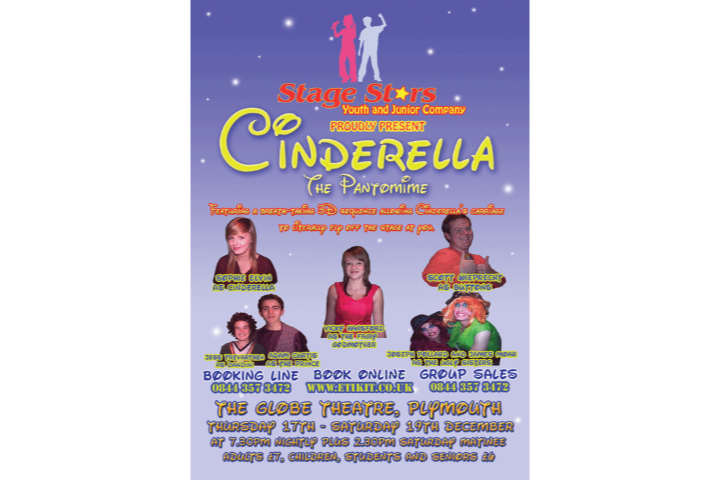 The story of Cinderella is one of the oldest and well told around. Well this year why not take a look at this classic from the view of Stage Stars. All is happy in the village of Merrydale until Cinderella learns of her fathers death and is left in the care of her evil stepmother Cruela and her two daughters Victoria and Daniela. Her only friend is the servant who goes by the name of Buttons and he secretly loves her.

After a visit the the forest the Prince announces he will be holding a grand ball with the fairest maidens in the land all attending. Cinderella is, of course, told she cannot attend the ball but with a little help from Buttons and her Fairy Godmother she is whisked off to the palace in a golden carriage.

Cinderella is the highlight of the ball for the prince and he instantly falls for her however the Fairy's magic runs out at 12 and so Cinderella has to leave the ball promptly leaving behind just one of her shows. The Prince instantly declares whomever in the kingdom the shoe fits will be his bride.

As the Prince and Dandini begin the hunt for the mystery women the Ugly Sister try a spot of cleaning resulting in a bigger mess then when they started (the Stage Stars slapstick scenes are excruciatingly funny). The Prince finally arrives at the last house and after the two ugly sisters fail to fit the shoe he is told no-one else lives there. With the help of the audience Cinderella is however found and her and the Prince are re-united to live happily ever after...